French cuisine is not plentiful in South Jersey.

But a Philadelphia-born restaurant will open its doors this week, bringing escargot (snails) and other French classics to Collingswood.

Richard and Christina Cusack of June BYOB, a restaurant that quickly gained success in the restaurant-rich area of Passyunk upon its opening in 2019, were hit with the effects of the pandemic like so many other restaurant owners. The couple closed down the Philly location in September 2020.

Named after Richard’s mother, June BYOB on East Passyunk Avenue served an à la carte menu, his modern take on French classics. But then COVID-19 shut down the country. They tried take-out and pop-up ideas for about five months before officially closing their doors.

The Cusacks took a yearlong hiatus to save up for a new location – Richard worked in various kitchens and did some private chef work. Then, they stumbled upon a listing on Craigslist in April for a place on Haddon Avenue while shopping for kitchen equipment.

“I didn’t even know it was for rent … and then I saw it on there and I was like, ‘This is kind of weird cause I didn’t think anybody used Craigslist anymore,’ but yeah that’s how I found it,” Richard said of the location formerly occupied by That’s Amore.

The couple lives in Bellmawr, so they had decided to expand their search for a new location to South Jersey. At first, Richard found a place in Merchantville he liked but it fell through due to pricing disagreements, he said. They went back and forth between Philly and South Jersey until landing in the borough.

The building occupies a prominent corner where Haddon meets Collings, which appealed to the Cusacks. They also liked the building’s big windows.

Surrounded by Italian restaurants, the two weren’t sure how well their French cuisine would do.

“I was gonna [dial] it back and do more recognizable dishes, but my wife said to me, ‘This is not the food you do,’ ” Richard said. “ ’You do like really French food so why don’t you just come out guns blazing and just [expletive] do what you do?’ So that’s the route we’re going – classical French with snails and everything.”

So what else is on the menu?

Richard draws inspiration for his modern interpretations of classical dishes from his culinary journey and mentors like Pierre Calmels of Bibou BYOB in Philadelphia. His impressive resume also includes the kitchens of Daniel in New York City, and the former Le Bec-Fin, Parc and Le Cheri in Philadelphia. The chef also interned at Michelin star restaurants including Le Pergolèse in Paris.

“Sometimes I find myself like, ‘Alright, what would Pierre do in this situation – how would he handle this, how would he react?’ ” Richard said.

His inspirations also come from perusing vegetable and fish markets and thinking about the animals he cooks – their diets and habitats – to pair ingredients that would naturally go well together.

“For instance, I was thinking of a duck dish last night – all right what’s around a duck, like there’s wild rice in the river, wild rice would be nice,” Richard said. “There are cherries in the woods … pickled cherries. And mushrooms, hazelnuts – all that stuff goes really well with duck.”

As it was in the original location, June BYOB’s menu is à la carte – served Wednesday to Saturday. There are appetizers, entrees, desserts and coffee.

Richard recommends guests try the Canard à la Presse (red wine-marinated Muscovy duck). It’s an old-school traditional dish where a whole duck is roasted and carved tableside. Then the carcass is pressed in a silver-plated duck press oozing out the blood, marrow and juices for a rich sauce that is flambéed with cognac and wine. The duck is coated with the sauce and various accouterments.

The three-course option is a reserved item for $170. It comprises a complimentary aperitif, a course with duck confit and foie gras parfait, then the pressed duck course, and finishes with dessert – tableside Crêpe Suzette (crepes flambeed with Grande Marnier, an orange caramel sauce and topped with ice cream). Guests must reserve via email.

“It’s considered high class and the height of elegance in dining,” Richard said. “It’s honestly delicious; people think blood and sauce are gross, but the first time I had it I was like, ‘Wow, this is amazing.’ ”

Guests can finish off their meal with a choice of three desserts – Cherry Clafoutis (a baked fruit dessert) with powdered sugar; Rum Baba (a small yeast cake) with muscovado Chantilly cream, or a warm chocolate and hazelnut cookie served in a mini oven dish and topped with vanilla ice cream.

The chocolate Gateau (22 layers of crepes and chocolate mousse) is offered as a special. There’s also French press coffee to go along with the sweets.

And if you’re looking for something special, on Sundays there is a four-course tasting for $65 per person, featuring a choice between two items each course and some specials. For the dessert course, tableside Crêpe Suzette is available — it is only offered on Sundays and with the Canard à la Presse.

More:These new South Jersey eateries have it all, from gluten-free pizza to biscuits and gravy

Almost every dish on the menu is taste-tested and approved by Christina, who Richard says pushes him to do better and is his biggest critic. As a sommelier, she also provides guests with wine suggestions along with warm hospitality.

“Everyone used to call her the girl with the iPad at the last restaurant,” Richard reflected. “I would feel so bad cause she does a hell of a lot here that you don’t see. So she’s not ‘the girl with the iPad,’ she’s also the owner. And if anything, she runs the place. I just sit in the back and cook; she makes all the decisions.”

A nicer version of ‘your French grandma’s house’

Much of the design and look of June BYOB came from Christina’s passion for decorating.

That’s Amore’s owner Alfredo Fischioni still owns the building and made renovations prior to the Cusacks moving in – he painted the exterior and interior blue and added new flooring. Then the couple made the space their own, adding chandeliers and other lighting fixtures, as well as furniture.

The restaurant’s style is inspired by the couple’s visit to Versailles — “an old-school, royal French look,” as Richard puts it. There’s lots of gold coloring, adding to the classical, fine dining feel.

An 1892 circa French couch the Cusacks refurbished welcomes guests to sit and drink as they wait to be seated.

Guests can relax in a mix of black leather chairs (a gift to the couple from Calmels at Bibou) and wooden chairs repurposed from the Passyunk location while enjoying food served on expensive china and gold silverware. Tables are set with double linens that suppress the sound of glasses clinking against the table.

There are 40 seats spaced out for comfortable seating.

A lot of thought was put into the mood of the room. Richard said he wanted “to make it feel like you’re coming here to spend money.”

“You want to have a great atmosphere and justify why you spent that money,” he explained. “And also, the service has to be impeccable – I actually have an extra server on every night to make sure everything runs smoothly.”

There is no outdoor seating yet because the borough has not approved his plan, he said.

“The borough is proposing we have two tables out front of our restaurant and none on Collings or Haddon Avenue because they require five feet of walking space for pedestrians, but our argument is the walk is five feet itself and if you walk up and down the avenue other restaurants are definitely hitting those requirements,” Richard said.

He hopes to have some outdoor seating available by the fall.

Dealing with setbacks and preparing for the worst

Another battle the Cusacks have been fighting is hiring – “staffing is atrocious right now,” said Richard.

Richard says finding employees for the back of the house, such as dishwashers, has been difficult.

He redesigned his menu to minimize steps for making and plating dishes to work with the limited kitchen staff, which includes himself and his second chef Jay Ship at the moment.

The menu has been rewritten three times with the additional issue of food cost increases due to the pandemic, he confided. Prices have gone up by $2 or $3, Richard said. As a result, some dishes that might have made the menu are now specials or not there for now.

The average guest might expect to pay $65 now at June BYOB, he said, as opposed to $50 prior to the pandemic at the former location.

The menu is set to be seasonal but with the fluctuation of costs, chef plans to add and switch things out as he sees ingredients go down in price.

And Richard is also preparing for another shutdown – possibly opening the big windows to create some open-air dining, though he said he hopes it doesn’t come to that.

More:These culinary students are creating recipes for their futures

“God, I hope that doesn’t happen,” Richard said. “If they have to shut down restaurants again, I will probably cry. But we are discussing plans on what to do for that.”

Bringing the best to Collingswood

For now, the Cusacks are excited to make a new home for June BYOB in Collingswood, to come in and show the town their best.

“I don’t know if this comes off negative or not, my wife says it does, but I just want to come in and compete and show everyone around that I’m the best,” Richard said.

“I want to come in and show ‘em (the town) I can do something … I guess the pressure of performing — it’s exciting.” 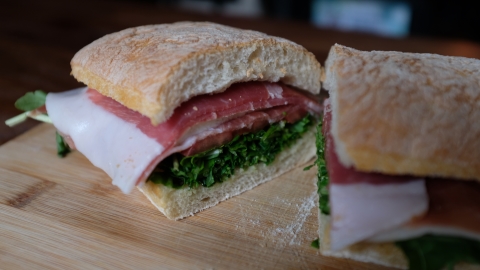 Next post Panino with passion together with a Puglia philosophy